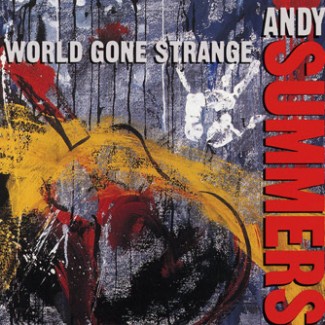 All compositons by Andy Summers
Produced by Mike Manieri

Very special thanks to everyone who played
and contributed to this album and also to
Ron Goldstein, Peter Shukat & Mike Manieri.

And to my family without whom …

As might be expected given the caliber of music, the 10 compositions presented on this 5O-minute outing are performed with flawless precision, be it the Holdsworth-like tone poems “Somewhere in the West” and “But She,” the lush, Pat Metheny-ish reveries of “Bacchante,” and “Dream Trains,” or the crisply modulated blues-rock bite of the pun-ishly titled “The Blues Prior To Richard.”

Yet, while his influences are readily apparent, Summers manages to inject enough of his own personality to make “World Gone Strange” more than a vanity piece or just a polite nod to his favorite artists.

A gifted but unflamboyant guitarist’ he prefers to serve the songs at hand rather than launch off on self indulgent improvisational forays designed to showcase his technical prowess. Accordingly, his solos are carefully constructed and executed, as demonstrated by his work on the nicely understated “Song For M” and the avant-funk-meets-Far-Eastern-exoticism of “Oudu Kanjaira.”

His only failings are a tendency to favor precision at the apparent expense of spontaneity and a lack of more vocal-oriented songs like the enchanting title track, which mixes wordless singing by Elias and an uncredited male musician with Summer sonorous guitar work.

Still, there’s no doubt that Summers has followed his muse into a musical domain he is far more comfortable with than the post-Police rock he initially pursued, following that most arresting of rock bands demise in the mid-’80s.

Just how far he has come from his Police days is tellingly illustrated by the color photo of Summers on this album inner-sleeve, which shows that his once dyed blond hair has finally resumed to it’s natural brown. Now if only he’d complete the acoustic guitar duo aIbum he began a few years ago with ex Stephan Grappelli/Soft Machine guitar ace John Etheridge. Summers’ transition from rock superstar to quiet guitar virtuoso would be complete’