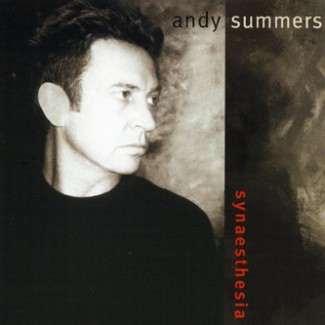 All compositions published by Final Curtain

Andy Summers’ years with The Police were the stuff of fantasy. Now, solo and 52, he’s touring again-but in very different style, as Erich Boehm discovers I wish I were him,” Andy Summers says of the humming waiter who is delivering our pasta- and for the moment, at least, he seems to mean it. So far, it has been a trying day. Being on tour is exhausting in itself, but the Italian promoters who are organizing proceedings – though their hearts seem to be in the right place-are not quite up to the job.

The tour bus is a 50-seater with no place to lie down. The tiny generator provided for one show was just about powerful enough to drive a home stereo. And here in Rome, Summers, drummer Michael Shrieve and bassist Jerry Watts have just spent two hours trying to find out which hotel they’re supposed to be staying in.

None of this is insurmountable, but it is a considerable contrast to the days when Summers was the guitarist in the Police, once the most popular rock group in the world. So he’s treating lunch as a small respite. Not only did he veto the promoter’s choice of restaurant in favour of a more atmospheric place -thus ensuring that no one now knows where we are- but he’s also not in a hurry. The anxious queue of Italian journalists back at the hotel will just have to wait.

There can be a certain heavy-lidded world weariness to Summers at the best of times. But in conversation he’s charming and articulate and, though clearly in need of nap, he’s still aiming to please.
“It’s great to play on the Continent- it’s my favourite place to play,” he says as he tastes the wine, “but while this tour is fun, it’s also a bit hard. It’s so new in a way, and it’s been a while since I’ve been out doing it. In The Police, it was a different sort of trip, I was behind the vocals-this time I’m leading the way, the guitar is the voice. “The Italian tour is one of several scheduled to coincide with Summers’ new album, Synaesthesia, his first release with the eccentric German label CMP. Synaesthesia means the fusing of senses as in hearing bird song and simultaneously seeing the colour yellow, for instance. (Apparently, this actually happens to some people.)In the abstract, at least Synaesthesia is a concept album. The all-instrumental material is a collage of styles – everything from surf – jazz to ethnic- ambient to epic rock. And unlike many accomplished players, Summers places emphasis on the compositions as a whole not on showcasing his virtuosity” . The result is his best post-Police effort, eclipsing 1989’s Grammy-nominated The Golden Wire.”Yeah, I’m very happy with it,” Summers says, “but I prefer to think of it as conceptual rather than a concept album. I don’t know how specific I can be, but in reference to synaesthesia, I think that a lot of musical and visual terms are interchangeable in terms of colour, shape and line. I mean, why is it called the blues? And composition is first for me. The whole guitar thing, well, it’s madness out there. I don’t want to compete in that area. I do what I do. I have a signature style, and it’s not about athleticism or speed.”Now 52, Summers has had an unusual career, one full of surprises – some circumstantial, and some of his own making. What’s not commonly known is that he was a member of both Soft Machine and then The Animals in the late SixtiesWhen the Psychedelic Era crashed, Summers found himself at a loose end in Los Angeles. “I decide to stay in LA, for whatever impulse. I ended up going to college, studying music, classical guitar, for five years. And I taught guitar. It was like a sabbatical, a strange period, like 40 years in the desert – and I was very poor.”When I eventually got back to England, I thought well, it’s all over. Then through Robert Fripp the avant-garde guitarist and an old friend from Summers’ hometown of Bournemouth, I picked up a gig with Neil Sedaka in 1973.”I was penniless. I didn’t even have an amp. I met him in his hotel and I asked him for the money to buy an amplifier – I gave him some line like ‘all my gear hasn’t arrived from America’. And he hadn’t heard me play, but he gave me the money anyway. I pay tribute to that moment. It sorted me out. I could get a flat and a car. So I got into the scene, playing for other people, traveling around Europe, and it was nice. But I knew there had to be more: Then the punk thing happened, I met Sting – and Stewart Copeland, and off we went. “WHAT followed was an adolescent fantasy for someone who was already in his mid-thirties. It cost Summers his second marriage. And, at its pinnacle, the union of The Police disintegrated as well. Summers maintains that the intricacies of that falling-out are too complex to explain, but he insists that the perception of him having been a calming influence between the warring egos of Sting and Copeland is a myth.”We were all mediators and also at each other’s throats at different times. We were a like nucleus, an initial intense attraction that blows itself apart. I don’t think we could’ve gone on.”It’s ironic that success at our level didn’t make anything any easier, it just compounded the problems. The first bit is always the best – you’re there, you’re innocent, it’s the team against the world. Then suddenly everyone has their own limousine. But I’ve dealt with it, I believe, as much as one can. You realise, ‘Hey, I was doing it before, I can do it again.’ “And there has been some rapprochement. The former band mates maintain contact, and for that matter, Summers has remarried his second wife. They live with their three children in Santa Monica. But for today, at least, the quiet life is on hold.Come the evening, several hundred Romans in a swish nightclub cheer their “Undi” as he hits the stage. But for the first song, none of the monitor speakers is working, and during the second Summers receives an electric shock that sends him reeling.Summers shows himself a consummate pro. He dismisses the incident with “That could’ve been arrivederci!” and leads his new trio to two encores. By the end, there are apparently no songs left unplayed. So Summers offers a synaesthetic solution to the clamouring crowd – he plays the blues.