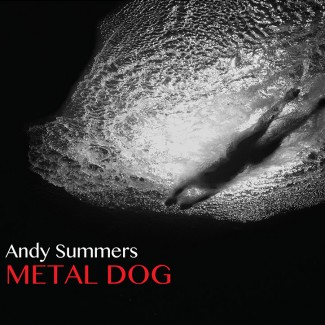 Metal Dog is the stunning new release from guitarist Andy Summers; an all instrumental album replete with razor edge guitar that pushes to the outer edges of generic description. Kicking off with the title track which opens with a compulsive metallic figure that insinuates itself immediately, the track bursts into almost an indie rock chorus in it’s B section to be followed by a quirky fuzzed out guitar solo that rises and rises -until it merges back into the song like choruses that take us out.

Tracks in the middle of the CD Qualia and How Long is Now are loaded with freaky almost Balinese textures. These compositions- exotic as they are – retain a sunny mood, rather than
the darkness that is associated with so much loop style music. This feeling is carried further by Summers in the following track Harmonograph which opens with a guitar solo that pierces the
honeyed texture like an arrow- eventually falling into a wild blanket of harmonic distortion for a release that is like bathing in warm waters
Ishango Bone, the fourth track on the CD, presents a quirky, seemingly simple guitar figure that snakes along in what might seem to be a dark and primitive landscape , but then falls into
what might be a radiant valley indicated by the soaring guitar and then – as if night falls – returns to the primal source from which it emerged.

There are many other track on this Metal Dog that highlight Summers innate guitar skills but, more importantly, these tracks
illustrate the use of the instrument to achieve a music that is fresh, challenging and that pushes through the standard ideas of genre. At turns turns lyrical, dark and cinematic, the result is one of intrigue and ultimate reward.