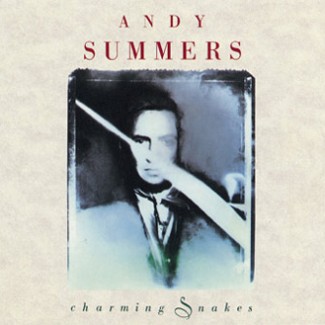 This album is dedicated to my father Maurice Summers

If STING’s the one getting all the hits. Andy Summers is doing a better job of making interesting music in the aftermath of THE POLICE. Instead of forming some dumb rock band and getting a screaming vocalist in, the guitarist has chosen to pursue a thoughtful instrumental direction.

Mysterious Barricades’ and ‘The Golden Wire’, his last two records were exquisitely framed sessions, mood music for people with ears. This time Andy’s upped the energy a bit without sacrificing sensitivity. “Mexico 1920′ opens the record with a clever guitar melody; the final ‘The Strong And The Beautiful’ has killer metal riff; the title track revamps the old Police skank-shuffle into a call-and-response duel between Summers and saxophonist Bill Evans, while the bewitching chords of ‘Passion Of The Shadow’ melt resistance away.

Summers drafts in heavyweight cats like keyboards master Herbie Hancock and even Sting himself, but the achievement is impressively his. Poised between rock and jazz without trying for a clumsy ‘fusion’, this fine and distinctive record deserves your attention.

BY MARTIN SIBEROK
“Undercover Guitar Man Andy Summers proves there’s life after super stardom.The music is obviously done with great love, and that’s the part I can get my teeth into”

Andy Summers likes Montreal. Audiences here have always appreciated his music. As a member of the mega rock band the Police, Summers was practically deified in this city.

Four years ago while promoting his first solo album XYZ, he played Club Soda. Summers remembers it as the best gig of the tour.

Now Summers returns-with bassist Darryl Jones, saxophonist Bill Evans, keyboardist Mitch Forman, and drummer Chad Wackerman-for the jazz festival. The show was the first to sell out, forcing the organizers to add a second one.

As the Police’s guitarist, Summers revealed himself as a sophisticated player and sound innovator. His contributions provided the band with its more complex and inventive material. And it was he who introduced the echo unit into their sound, featured on Walking on the Moon

Tracked down at a New York studio, where he is finishing off his fifth, and as of yet untitled solo disc, an elated Summers expresses satisfaction with the results. Over the years, he has changed his sound, moving from the ambient atmospherics of Mysterious Barricades to the tougher jazz-fusion of Charming Snakes.

It shows a personal progression,” says Summers, taking a break from the mixing board. “Mysterious Barricades was closer to the demise of the Police and I was just getting my feet back on the ground. Since then I’ve become bolder with my music and have gotten to where I want to be.

When Mysterious Barricades was first released, many critics wrote it off as being new-age. Such opinions had more to do with the disc being on Private Music, a new-age record label, than with Summers’ actual direction. It was much more influenced by the early albums on KG. It had nothing to do with newage, which is a late mid-’80s California thing. Christ, I’m a English guy from the ’60s, it had nothing to do with me, and I proved it on subsequent albums.”

THOSE WERE THE DAYS

A product of the ’60s, Summers is a journeyman musician, who played with such people as Zoot Money, Eric Burdon, and Kevin Ayers. He was also a contender for Mick Taylor’s job with the Rolling Stones, and gigged with a Mexican rock band in East LA. His checkered past even includes a brief stint in Neil Sedaka’s back-up band, and he can be heard on the singer’s 1974 album, Live at the Royal Festival Hall

“Sedaka got me back on my feet when I really needed to be helped,” says Summers. I had just moved back to London after spending five years in LA and was totally penniless. With the help of my friend Robert Fripp, I got a connection to Sedaka and went to see him. I didn’t even own a guitar amplifier, and I had to ask him-he hadn’t even heard me play- if he would lend me the money to buy one. He did, and I got the gig.”

Jazz is not new to Summers. Before joining Zoot Money’s Big Roll Band in the mid-’60s, he played jazz and pop standards in hotel lounges and coffee bars in and around his hometown of Bournemouth.

Jazz is where I started,” says Summers. I’ve always been, in quotes, a serious musician. I went to university and studied classical music for four years. In one way, it all culminated in the Police. Although we were a rock group, the information for the music came from a lot of different places.”

When the Police broke up in 1985, many people thought Summers would simply find a singer and start another rock band. “It wasn’t what I wanted to do,” he says. The Police was as good as it gets in the rock scene. I felt I had to play what was in my heart. And it is really more like this.”

At 48, Summers harbours reservations about returning to the rock milieu. “The whole framework of the rock scene is something I don’t feel comfortable with. I can’t do that particular pose or trip anymore. I can’t get into the whole MTV scene anymore. It’s just not me, and I really don’t think much of it. It wasn’t what the Police was about either. The Police was more about what I am doing now, than being some commercial rock group.

“My strengths are as a composer and as a guitar player in instrumental music. If I’m going to be in music, this is where I want to be at this point in life. And though it’s a struggle in some ways, I’m happy doing what I’m doing.”

Musically, Summers has managed the transition from rock star to jazz guitarist with little difficulty. While fellow musicians and fans have been encouraging, he’s faced the most problems from within the industry.

“It’s the way people perceive and deal with you. Having come from a very famous band [he laughs], people think that’s it. I’ve had to deal with that attitude quite a lot in terms of getting tours organized. People remember me from the Police, and I’ve had to keep on cranking out records and making it known that I’m doing something else.”

Besides being a jazz guitarist and a composer of film scores (Down and Out in Beverly Hills, Weekend at Bernie’s), Summers is an accomplished photographer, who published Throb, a collection of his work in 1983. Still a very active lenseman, Summers is in the process of putting out another book.

“I’m working with a guy in LA and trying to pull it all together. Though I’ve been extremely busy doing my music, I’ve still been out this year photographing. I did alot of stuff in Mexico, and I’m suppose to have a show there in October. And one is being arranged for Japan.”

Summers has proved there is a life after super stardom. “There we were one minute, and then we weren’t the next. But you carry on. You adjust and deal with whatever life presents. I’m giving it to you in broad strokes, and obviously there’s a lot more detail. The Police was a very big thing, and you can’t expect to go through something like that without being emotionally attached. It was pretty life-shaking stuff.”

As to whether the Police made him rich, Summers is caught somewhat off-guard. “That’s a little personal isn’t it. What paper is this? The Daily Mirror”

He pauses for a moment, and then continues. “What would you think? What would anybody think? I’ll leave you to draw your own conclusions. Let’s just say, I’m doing okay.”