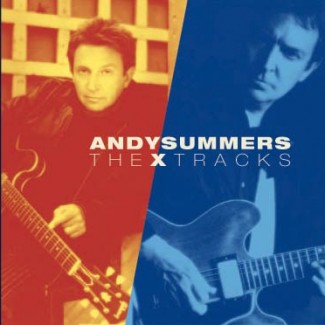 This CD is a selection of tracks recorded between 1997 and 2002. Already in 2004 they appear to me like fading photographs, memories, associations with people, time, and place. The song Big Thing was originally recorded on a CD called Charming Snakes… I called Herbie Hancock who I had recently played with on a gig with Joni Mitchell in New York. I was honored that such a supreme musician would play on one of my tracks, but there were complications. As it was difficult to get Herbie to the studio where I was recording, I realized that the only way to pull it off was if I took the studio to him. On a hot afternoon in West Los Angeles we turned up with a Studer recorder and other paraphernalia to get the maestro on tape, around four in the afternoon. He was sleeping that day so it didn’t happen.

Next day we tried again, same time, this time Herbie answered the door with a smile and by about seven in the evening after we had dispensed of a bottle of champagne, eaten a few bowls of good Chinese food, Herbie started sharpening his pencil and began making notes. Opting to play a very beautiful improvised prelude at the beginning he then wailed through the track in one take and we returned to the Chinese and champagne. After that I featured Big Thing as a show ender for a couple of years turning it into a more slamming power trio version with the great Bernie Dresel on drums which is the version on this CD recorded “live” in the studio in one take at about 1am in the middle of Manhattan when we were already burned out after a long day in the studio and the streets outside were flooded. I thought it was good enough to slip into a new album called The Last Dance of Mr X just as it was about to go to press.

The Three Marias is a beautiful Wayne Shorter tune that was taught to me by Larry Coryell when we toured one Summer. Typically Wayne in the originality of melodic line and form structure, I think this is one of the most beautiful songs I have ever recorded.

Goodbye Pork Pie Hat, the great Mingus tune, was recorded for Peggy’s Blue Skylight, my Mingus homage album. I had been searching for a rapper to do something from Mingus’ autobiography, Beneath the Under Dog, and the name I came up with was Q-tip from Tribal Quest. I tried hard to find him, but could not get a return call. I let go of that idea and went to New York to record. At the end of the day of recording with Debbie Harry and also Randy Brecker I got into a conversation with the engineer. I related to him my idea about Q-Tip, he looked at me and said “you want Tip, we can get him. I’ll call him on his cell and you can speak to him.” In a few seconds I was leaving a message for Q-Tip telling him where I was and what I wanted to do. He rang back half an hour later and told me that when I called he was in Tower Records making a purchase of the video about the life of Mingus – he’s a huge Mingus fan and will be right over. I was floored by the synchronicity of all this, I imagined that he had probably never heard of Mingus but as if sticking a divining rod into the ground of music I had picked exactly the right guy. He turns up, carrying his Mingus video in a Tower Records bag, is charming, handsome and asks if by any chance I have recorded Pork Pie – “Yeah” I say, and play him the track. “I wanna do something over that,” he says. I have a poem called Where Can A Man Find Peace by Mingus, I show it to him, he digs it and we go into the booth to lay it on the track. Half an hour later we leave the studio together with Layla my daughter and go downtown to Nobu sushi that is owned by his best friend Robert De Niro. Later I leaned across the table to Layla and said “quite a good day darlin’ doncha think?” and then swallowed a piece of Toro and washed it down with a vodka martini.

‘Round Midnight by Thelonius Monk is one of the great ballads and again like the Mingus album it was in the spirit of showing the breadth of a great composer that I decided to include this on the Green Chimneys album. Knowing that Sting would probably love to sing a such a great piece of material I didn’t feel bad about sending a him a missive about the Monk album and the possibility of getting together on this track. In short order I got a very positive response. The problem now was time, place and how to put the whole thing together. I recorded a demo of the backing harmonies and arrangement to give him an idea of tempo, key, etc. No problem there except he wanted it down a half step into E flat minor the original key rather than E minor where I was playing it not only for convenience but also the fact that the guitar in that key is proxy to several dissonant chord voicings that disappear in the flat key. But the singer rules and the only way around this was for me to put heavier gauge strings on the guitar and tune it down a half step and voila! I recorded the track with Peter Erskine and Dave Carpenter and took a flight the next day to Italy where Sting was living. Stings home in Italy is the stuff of dreams. Recording the song was no problem, getting me to leave was, and I have been thinking ever since of some
other songs we might record there.

Weird Nightmare needed a voice with a very special quality, not necessarily straight jazz but a quality that would give ownership of the song. A few years back I had heard Blondie at Hammersmith Odeon and was knocked out by the quality of Debby Harry’s voice and instinctively felt that she was capable of a wide range of material. It turned out that in fact she had spent four years singing with a downtown New York group called the Jazz Passengers and was up on a lot of jazz material. As with Sting I sent her a rough arrangement of the way it might go. We changed key a few times and had a number of tapes whizzing across the US via Federal Express but finally on a freezing day in January we entered the studio in New York and spent the afternoon recording the song until we felt it had just the right amount of creepiness. After that we hopped across the street to a country and western bar and with the sound of Hank Williams twanging in our ears finished the night at a Turkish joint a few blocks south of Central Park.

All the songs on this cd were chosen because of what I hope is their special quality, but some things are better left unsaid – so, rather than turning this into a book, I’ll leave it here and let you enjoy the music, which tells a story in a different way.

X Tracks: Best of Andy Summers covers the years 1997-2002, essentially his stint at RCA. If you haven’t followed his post-Police career, you might be somewhat surprised at his jazz leanings. Texturally, he flirts with smooth jazz at times, but his penchant for dissonance keeps him out of that camp. There are a handful of original compositions alongside pieces by Monk, Mingus, and Wayne Shorter. Q-Tip’s reading from Mingus’ Beneath the Underdog on “Goodbye Porkpie Hat” does little to add to the tune, beyond differentiating it from Jeff Beck’s version, but the way Summers handles Mingus’ “Boogie Stop Shuffle” with an added horn section is great. Similarly, Sting’s turn on vocals on the overdone “‘Round Midnight” is serviceable, but the way Summers digs into Monk’s bag of dissonance and crazy intervals on “Think of One” shows a deep understanding and feel for Monk’s music. The Wayne Shorter tunes are beautifully done, and the album opens and closes with Summers in jazz power-trio mode, rocking things up just a bit (even quoting “White Room” in “Big Thing”). X Tracks: Best of Andy Summers is a good summary of his post-Private Music/Windham Hill years, and would make a fine starting place for someone interested in what Summers has been up to since the Police. Sean Westergaard