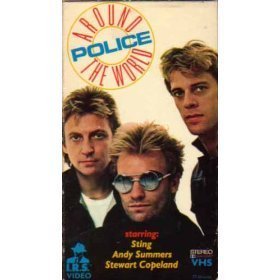 This is the video that turned me from a Police “fan” into a true “fanatic”. A video chronicle of the Police’s first world tour, the viewer is invited along with the band to explore Japan, Hong Kong, Australia, India, Egypt, France, Latin America, and finally end up in Los Angeles. The stage performances showcase the band playing with a frenzy and passion that would not be matched during their superstardom years. (In fact, sometimes you could say they got TOO passionate–Stewart drives them like a madman through some numbers, and Sting gets into a swearing and spitting match with an audience member in France.)

The off-stage footage is often hilarious (Andy sumo-wrestling in Japan; a squabble among the Copeland brothers in Egypt that dissolves into shoving and cursing in Arabic) and also quite revealing of the tensions that always lurked beneath the surface with the group. Production values are perhaps not the highest, but that doesn’t detract from the joy of the music.

I had been waiting for years for these guys to release a Live DVD I had the pleasure of seeing them in their prime for both the “Ghost in the machine and Synchronicity tours” in Vancouver, Canada. I recently purchased the “Live in Atlanta” show and have just learned that they also have a Live DVD of the “Ghost in the machine tour”((Korea)) However it seems to have pretty bad reviews. Point is I have also just learned of the “Around the World VHS” which seems to be a favourite of everyone.. (how long has DVD technology been around for now?

my question is WHY has this NOT been released on DVD?? Here’s the thing I’m a fan not a fanatic of ‘The Police’ nonetheless they’re a solid band who kicked some a** during their time. However if I was that guy or girl who just couldn’t live without these cats in my collection I’d be pretty dissapointed that those in charge can’t seem to make the transfer from VHS to DVD and make all their devoted fans big or small happy! Isn’t this how Bootlegs are born…hmmmm. Peace.