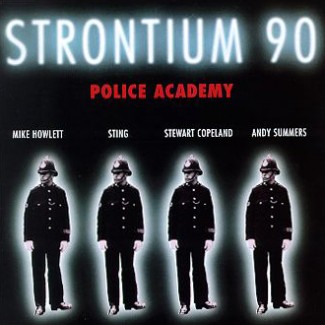 The first recording ever of
Sting, Stewart Copeland & Andy Summers
which resulted in the birth of The Police

All tracks mastered at Chop ‘Em Out, London England

I first saw Sting play live in a room above a pub in Newcastle-on-Tyne, England in the summer of ’76. The band was Last Exit, sounding a bit like Weather Report with vocals. Sting soon moved to London following his best chance instinct. I had just quit my group Gong and was working on material for my own project. I asked sting to sing on the demos I was recording. Meanwhile I’d bumped into Andy Summers at a party in January ’77. He’d been out of the scene for a couple of years studying classical guitar. When I asked him to play on my demo, he was glad to do something new.

I needed a drummer. Sting had met Stewart Copeland, he’d bring him along. So that’s how it happened. We all met in a studio called Virtual Earth around February 1977. This was the first time Sting, Andy & Stewart played together. That session makes up the studio part of this record.

The first gig was in a huge circus tent in Paris in front of 6,000 crazy French hippies on May 28, 1977. It was a reunion of my old group Gong – an all day event with each band member brining his own current project. Mine
was Strontium 90, and this was the first time we had played live. That was the first time Sting, Andy & Stewart had stood on a stage and played together. The gig was recorded but only the monitor mix survives which makes up the live part of this record.

Strontium 90 was just a step on the path that ended in The Police. For the observer of patterns, here is a footnote in the history of popular music. For the lover of moments of magic, here are a few gems!