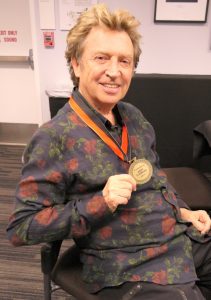 The conversation started with Andy’s soar to fame in the early eighties as part of “The Police,” one of the world’s most favorite rock band. Decades later, the Rock and Roll Hall of Famer and Grammy Award-winning artist Andy Summers continues to create music that captivates audiences, including a new solo album, Triboluminescence.

Berk caught up with Andy Summers, father of three, and sought to find out more about his musical journey, creative shifts and parental “coolness.”

Read more of the interview here.