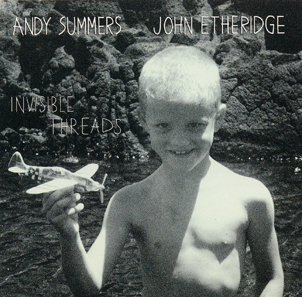 When I first met John he had just had a baby, or at least his wife had, I had mine coming. We were both playing in bands around London. Soon I diyed my hair bright orange and announced that I was in The Police. This led to considerable confusion, I lost a lot of friends, and the few remaining said that it was over for me, I had lost my marbles. Meanwhile I was working out a really cool version of “Goodbye Pork Pie Hat” with John, on acoustic guitar. John went to europe with the Soft Machine, I went to the East coast of America to play in punk clubs, I left the stage at C.B.G.B.’s and made it back to London on a 6 am flight from New York, to put on a white hospital robe and witness the birth of my daughter. I met John on Hampstead Heath and we worked out a nice acoustic version of “‘Round Midnight”. It rained. We sat under a tree and discussed the health benefits of negative ions. It’s been going on like this for years. Is this record the beginning or the end?
It feels a bit like casablanca.

ETHERIDGE, SUMMERS IN MINIMALIST DUET THE GAZETTE, MONTREAL FRIDAY 07.08.94 BY MARK LEPAGE
And another myth bites the dust at the jazz festival: so much for the archetypal stuffy Brit.

There sat Andy Summers and John Etheridge, two guitarists who’ve known the spotlight and could be forgiven for carrying a certain haughtiness of demeanor, a certain elevation of nose, even years after making their names on the international scene.

Instead, the Theatre Maisonneuve stage was stripped down into minimalist duets: two chairs, two mikes, two bottles of spring water, two spotlights, two guys and a couple of acoustic guitars.

Mostly, two invisible egos owned by two of the loosest, least pretentious musicians to squeeze their heads under a proscenium arch at this festival. It’s been a while since Summers performed first on a bill, as he did when he and Etheridge preceded fusion band Special Efx last night. It’s been about as long since two players entertained a crowd in as easygoing a manner.

Or as Summers said before a Miles Davis number, “Guitar is my second instrument. I don’t know what the first is, but it’s gotta be better than this.”

Not likely, unless he chooses to hire himself out on the party circuit as the toastmaster of self-deprecating witticisms. There was no earthshattering music here, but there most assuredly was a couple of impressive guitarists with range, a fair amount of taste, a genuine feel for one another’s playing, and the kind of human contact lost in too many of the exercises in didacticism that pass for genius when the gifted perform for the great unwashed.

Etheridge has been a freelancer since ’81, when Stephan Grappelli, the genius he used to play for, sacked him. Summers has dabbled in jazzisms since falling out with the guy who thinks he’s a genius and dabbles in his own. `

They fell together and released a record called Invisible Threads, the nominal excuse for last night’s freewheel. The loose shirts and tight fretboard runs said they would have played in the parking lot if asked.

They cut into a Horace Silver blues called Sister Sadie, the opening piece in a well-chosen 90 minute set of Miles, Django, Coryell, Mingus, their own accessible avant-garde originals and one message from Summers’s bottle-blonde days with the world’s biggest pop band.

Summers’s tone was the harder, Etheridge’s the warmer. Pyrotechnics were kept to a minimum as the two traded unshowy, inventive solos and unselfishly comped.

There was deft handling of the atonal flourishes of Larry Coryell’s ‘ One Plus Two Blues, played early in the set “before our hands give out.”

There was equally deft and playful running between-song commentary from Summers – arranging the water and cola bottles so the labels faced forward, like a good corporate citizen; bitching about what happens when the limelight (and the, roadies) find someone else to cosset: “I bet Strunz and Farah don’t have to tune their guitars.” The utterly anglo Summers claimed to be fluently bilingual, and in fact a Montreal native. “Welcome, stranger,” he deadpanned to Etheridge.

Always most notable for his, chording and texture, Summers led an echo-and-delay game in Message in a Bottle, one of the larger cheers.

Not the only one. Summers was well chuffed by the warm recognition of Moravia, a burnished original. He thanked the crowd: “We are actually thinking of turning professional.”

Why take the fun out of it?

At least one myth was buttressed last night as New York’s Special Efx’ gave a very professonial object lesson in why the purists sometimes have a point.

When fusion means a hybridization of funk, worldbeat, rock, pop and jazz that is too much of not enough, of any, it’s time to pass anti-fraternization legislation. Keep the gene pools separate. Theatre Maisonneuve’s teeth-grittingly oomphless acoustics did them no favors, either.