First You Build a Cloud with Ben Verdery 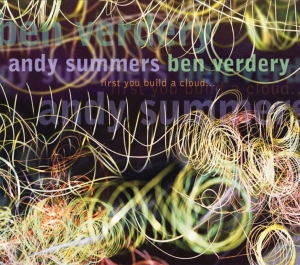 Music published by Rêve à Deux (BMI)
This is a Flickering Shadow Production.

It is available in the UK/Europe here:
http://www.rarerepertoire.com/release.php?id=1176 Ben and I met backstage at the 92nd St. Y in New York in January 2002. I was aware of Ben’s beautiful recording of the sixth cello suite by J.S. Bach but innocent of his exuberant personality. Having shared the same stage only a few hours apart on a rather exhausting guitar marathon I instantly saw Ben as a brother, a bond which we sealed within the hour with liquid sacrament realizing that apart from any future musical affinities we were at least the Brotherhood of the Grape.

A few weeks later we got together at my house in California to begin playing together with the idea that we might be able to make a CD. Although our musical disciplines were at least on the surface somewhat different Ben, classical guitar me, jazz & rock improvisation we had both played in each others main style. This led to an easy exchange where we were able to create an interesting hybrid non-generic style. Once again we celebrated with the vinous gift.

Weeks passed where due to the yawning maw of the mundane world it became impossible to get together. I received an email from Ben with the happy news that Yale University would commission the contemporary composer Ingram Marshall to write a concerto for us which would employ both electric and classical guitar something never attempted before. To this end Ben, Ingram and myself eventually assembled at my studio to discuss ideas, improvise for Ingram and demonstrate guitar sounds. This proved to be very successful. Ingram went away with a head full of sounds and ideas and Ben called me a few a days later to suggest that this might be the way to make a CD. Rather than taking the standard route of slowly composing together we go at it with a shock tactic. In other words just improvise together composing in the heat of the moment and trusting the instinct and musicianship built over many years, put another way blow.

This we did. As we moved through takes and ideas of playing together something crystallized. With Ben playing fantastic arpeggios on various guitars in remote tunings I found it inspiring to take off over these soundscapes following Bens rhythm and my own ear as he laid out the harmonies. The end result is this album most of these tracks were laid down in one take pure in the moment playing.

Subsequent to this recording we debuted the Ingram Marshall concerto Dark Floresence at Carnegie hall on the 3rd of March 2003 and followed that with further concerts in Ireland and at Yale. Along the way the Brotherhood of the Grape deepened its bond with several nights that would have done ancient Rome proud. A result of all this activity was that Ben and I discovered that we were in fact alumni of the Ancient and Mystical Order of the Shants but that is another story.

2007 album from The Police guitar ace, in a unique collaboration with highly acclaimed classical guitarist Ben Verdery. Released as the reformed Police embark on a high profile world tour with heavy international media and press coverage. Summer’s guitar playing was always at the musical heart of The Police, and when the band split up in the mid 80’s, he went off to make music outside of the Rock mainstream. This album is further proof of his wide ranging talents. Recorded in collaboration with Ben Verdery, First You Build A Cloud perfectly illustrates both their innovative and eclectic musical careers. Rare.