Today marks the official release of TRIBOLUMINESCENCE, the 14th solo album from multi GRAMMY®-award winning artist ANDY SUMMERS. The album is released by Flickering Shadow Productions available on all digital platforms in the U.S. and via Amazon, and distributed by Cargo Records in the U.K.

To listen and buy the album visit the following sites below.

Last evening SUMMERS marked the occasion with a special event at The GRAMMY Museum® in Los Angeles – view the archived stream at https://www.facebook.com/BOSS/videos/10155151148298588/. 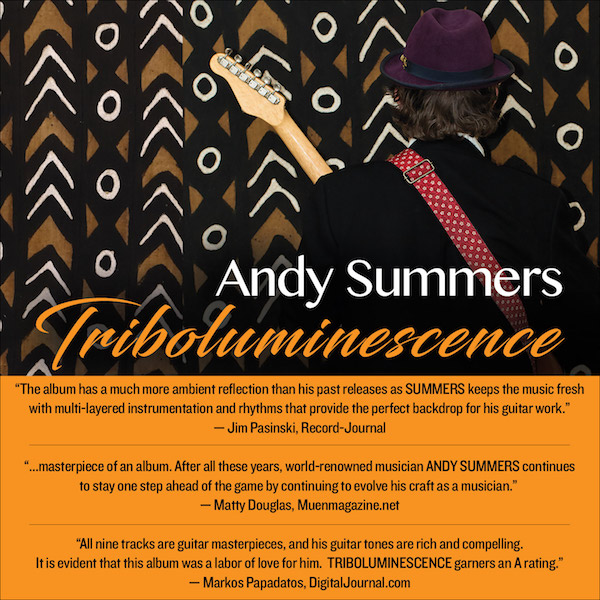 SUMMERS rose to fame in the late 1970s and early 1980s as the guitarist of the legendary multi-million-selling rock band The Police, followed by a prolific solo career that continues to this day. As a guitarist, songwriter and composer, TRIBOLUMINESCENCE (set for release on all digital platforms in the U.S. and via Amazon, and distributed by Cargo Records in the U.K.), shows SUMMERS pushing further toward the musical edge. As a guitarist, songwriter and composer, TRIBOLUMINESCENCE proves to be his most introspective work to date and is a collection of nine new tracks reflecting the style that SUMMERS has dubbed “New Exotic.”

Critics are already weighing in with praise for TRIBOLUMINESCENCE:

“TRIBOLUMINESCENCE is word that means creating light from dark, which I believe is an apt metaphor for any creative act and, especially, music,” stated SUMMERS. “I felt compelled to follow up the record I made in 2015, METAL DOG, where I was trying to go into a new territory – with not just a straight-ahead jazz or jazz fusion, rock or pop recording, but rather something outside of standard generic definition. I might say that this record results from a restlessness, an urge always to move forward with what I am trying to do – and damn the torpedoes!”

The nine tracks on TRIBOLUMINESCENCE all feature SUMMERS’ rich, lush, multi-layered, rhythmically and spatial signature guitar tones that draws the listener in track after track.