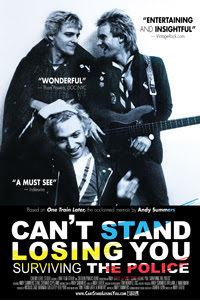 Based on the memoir One Train Later by guitarist Andy Summers, Can’t Stand Losing You: Surviving the Police tells of the rise of The Police.  From chance encounters with Copeland and Sting, through the band’s break up, Summers shares photos and memories as they prepare for their long-anticipated 2007 Reunion Tour.

The film is being released in North America by Cinema Libre Studio and will premiere in NYC theatres (AMC Empire 25 and Cinema Village East) starting March 20th before opening in Los Angeles on April 3rd ( Laemmle Royal and Pasadena Playhouse 7) with Seattle, San Francisco, Denver, Palm Springs and more to follow. More details at cantstandlosingyou.com

With limited seating, please RSVP ASAP to get your name on the list and join us for a memorable night!