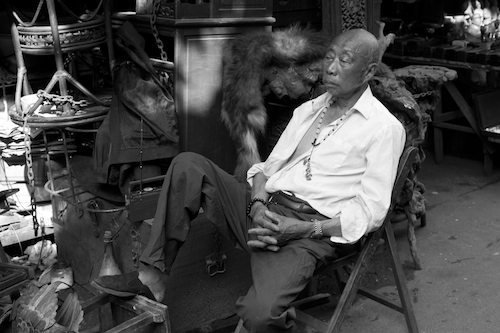 Andy Summers is largely known as the lead guitar player from the celebrated rock band, The Police. What isn’t common knowledge is that when he wasn’t on stage performing for stadiums full of fans, he and his camera were documenting life on the road with The Police and the cities where touring led the band. His impressions of that larger world around him will be presented in ANDY SUMMERS – DEL MONDO at Leica Gallery Los Angeles from November 9, 2013 through January 4, 2014, continuing the gallery’s theme of the year of rock and roll and entertainment. An opening reception for the artist is open to the public on Saturday, November 9, 2013 from 6pm to 8pm at the gallery at 8783 Beverly Boulevard in West Hollywood. Regular hours are Monday through Saturdays, 10am – 6pm and Sundays from 12pm to 5pm. Complimentary valet parking is available.

When the band members of The Police went their separate ways, Andy Summers pursued new avenues of jazz and classical music.  He simultaneously began to spend more time with his camera, developing more deeply, his moody street style of image making.  Now a Los Angeles resident, Summers is rarely without his beloved Leica camera. His photography is influenced both by his travels from Tanzania to Shanghai and by his profound absorption with music. While Del Mondo does not feature images of music, in a sense, the photographs he creates are a visual counterpoint to music that never leaves his head.

His taste for the melancholic leads us to the minor key photography he is drawn to. The renowned English photographer David Bailey’s first impressions of Summers’ gritty black and white photographs “were an influence of Edward Hopper.  As I click on more images I can smell the wet dark streets, a feast of 21st century redefined film noir.”  Even though darkness plays a significant role in his photographs, ANDY SUMMERS – DEL MONDO is not without bright spots of elation as the photographer records festive moments found throughout his travels.

¡RELEASED! The Human Rights Concerts Film Screening with Andy Summers and Stewart Copeland in Person
The Birth of Circa Zero