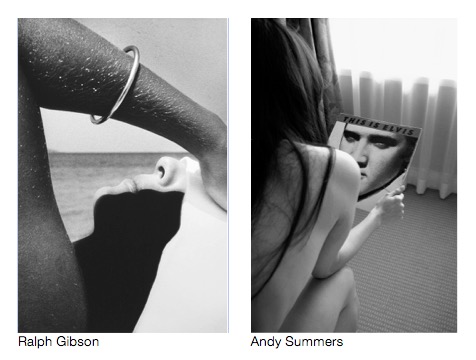 [Etherton Gallery Press Release] Tucson, August 25, 2015 — Etherton Gallery is pleased to present Light Motifs: Photographs by Ralph Gibson and Andy Summers, on view from September 15 through November 7, 2015.  Legendary American photographer Ralph Gibson will debut a new body of work, Political Abstraction and show a selection of large-scale gelatin silver prints of nudes, first shown at Paris Photo Los Angeles by Etherton Gallery in May 2015. Photographer and musician Andy Summers, formerly of the Police will show a selection of photographs made over the last twenty years in conversation with Gibson’s work. Light Motifs explores the aesthetic affinities that unite their poetic and otherworldly images. Etherton Gallery will have a limited number of the artists’ books for sale, including Ralph Gibson’s Nude (Taschen, 2009) and Andy Summer’s I’ll Be Watching You: Inside The Police (Taschen, 2007) and Desirer Walks the Streets (Nazraeli, 2009). Both photographers will be available to sign books at an opening reception on Saturday, September 19 from 7 to 10 PM.

Ralph Gibson will talk about his work on Friday, September 18, 2015 at the Center for Creative Photography at the University of Arizona, at 5:30pm.

Although an unexpected pairing, Gibson’s and Summers’ careers have taken them on parallel journeys. While Gibson has been enormously influential in photography, he has pursued a passion for the guitar and become an accomplished avant-garde musician. Summers reached the pinnacle of fame and success as guitarist for the Police and has been taking his camera on the road since his early days with the band, capturing the strangeness of life on the road, resulting in the publication of a number of well received books, including I’ll Be Watching You: Inside The Police (Taschen, 2007) and Desirer Walks the Streets (Nazraeli Press, 2009).

Long standing friends, Gibson and Summers share an interest in the legacy of Surrealism and their work is firmly rooted in their personal experiences. Gibson uses a Leica to construct elegantly lit, close-cropped straight photographs permeated with a beautiful grain. The iconic MJ, Sardinia, offers a close up portrait of Gibson’s partner, Mary Jane at the beach, reminiscent of English photographer, Bill Brandt (1904-1983). MJ’s tanned arm holds a towel over her eyes to block out the sun. Photographer’s wives have often been the subject of their pictures, notably Edith Gowin and Eleanor Callahan, but MJ is not only Gibson’s muse, she is an essential participant in the artistic process. Gibson’s staged photograph highlights what curator Keith Davis describes as “the tension between pictures and the world.” We see MJ through the lens of Gibson’s desire, always mysterious and out of reach.

Gibson’s new project, Political Abstraction is a series of diptychs, elegant compositions in which he builds meaning by juxtaposing images of simple unrelated subjects, such as an exit sign and a cactus. Each pairing of images feels like opposing pages in a book with an ambiguous narrative. This reference is not surprising since in 1969, Gibson founded Lustrum Press, the ground-breaking small publisher which published not only Gibson’s first three books, but controversial work such as Larry Clark’s Tulsa (1971) and Robert Frank’s, Lines of My Hand (1972).

Light Motifs includes a selection of photographs by Andy Summers made over the past twenty years. Summers’ early work presented the alienation and utter absurdity of life on the road with the Police and provides a fascinating glimpse into the rarified and occasionally claustrophobic world of the mega rock star. His recent work is reminiscent of surrealist photographers of the 20s and 30s such as Brassaï, although his subject matter takes him far afield to Asia. Nocturnal, grainy street images with blurred neon signs and a cropped view of a Buddha statue have an hallucinogenic quality.

For Elvis Fan, Summers photographed a young naked woman staring at Elvis Presley’s face on the cover of the posthumous album, This is Elvis. The record and a documentary film were released in 1981 at the same time that the Police released their blockbuster fourth album, Ghost in the Machine. Summers’ image is a cautionary tale about the ephemeral nature of stardom and its costs. Summers plays on René Magritte’s famous painting of a pipe, under which he wrote, “This is not a pipe” from the series called The Treachery of Images. Like Magritte and Gibson, Summers highlights the tension between “pictures and the world,” suggesting that photography is merely a representation and not reality. Even a man as relentless photographed as Elvis, is not revealed through his image. Photography is by its nature reductive and abstract, unable to convey the details that make up a life even though it simultaneously marks the presence of the photographer. It is opaque and cannot be read like a play list.

Etherton Gallery is located at 135 S. 6th Avenue in downtown Tucson. Regular business hours are Tuesday – Saturday, 11am to 5pm.

For more information about Light Motifs: Photographs by Ralph Gibson and Andy Summers, please contact Daphne Srinivasan, Hannah Glasston or Terry Etherton at Etherton Gallery at (520) 624-7370 or info@ethertongallery.com or visit our website at www.ethertongallery.com.

Andy Summers with Rodrigo Santos 2015 Tour is Here!
Check Out This News Article About Andy From the Brazilian Newspaper, Valor Econômico!