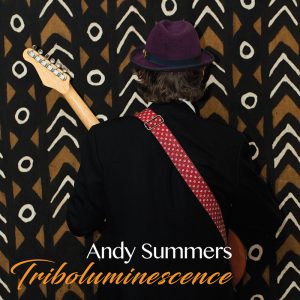 14th solo album from this legendary guitarist builds on the sonic and artistic framework of his lauded 2015 set, METAL DOG

Multi GRAMMY® Award-winning artist ANDY SUMMERS rose to fame in the late 1970s and early 1980s as the guitarist of the legendary award-winning, multi-million-selling rock band The Police, recognized as the most successful and critically acclaimed group of the era. SUMMERS’ innovative guitar sound was a key element of the band’s popularity, creating a new paradigm for guitarists that has been widely imitated in the decades since.

Not one to ever rest on his laurels, SUMMERS launched a prolific solo career that continues to this day, positioning him on the cutting edge of musical innovation – all the while following his passion for music as he keeps diligently busy writing, touring and recording in the studio. As a guitarist, songwriter and composer, his 14th solo album, TRIBOLUMINESCENCE (set for release by Flickering Shadow Productions on March 24, available on all digital platforms in the U.S. and via Amazon and Cargo Records in the U.K.), proves to be his most introspective work to date and is a collection of nine new tracks reflecting the style that Summers has evocatively dubbed “New Exotic.”

“TRIBOLUMINESCENCE is actually a scientific word that means creating light from dark, which I believe is a great metaphor for any creative act and, especially, music,” stated SUMMERS. “I felt compelled to follow up the record I made last year, METAL DOG, where I was trying to go into a new territory — with not just a straight-ahead jazz or jazz fusion or rock or pop, but something very much my own genre. This record results from a lifetime’s worth of receiving influence, digesting it, and trying to create a new voice. I feel like I’m taking the METAL DOG album and moving on from there and trying to expand the writing, the tonal palette and this idea that I have about creating new music.”

And new territory it is. SUMMERS draws upon all his musical influences from around the globe and takes the listener on a sonic journey that begins with the opening track, “If Anything,” a majestic, sonorous piece featuring SUMMERS’ guitar with endless layers of rich tone and never-ending sustain. The journey moves to the title track, “Triboluminescence,” with its exotic, looping Indonesian Gamelan-like sounds that evoke the feeling of being in a village in Bali, and then to “Adinkra,” which is influenced by West African music, with Summers playing all the drums and percussion.

TRIBOLUMINESCENCE once again builds on the sonic and artistic framework of his lauded 2015 set, METAL DOG. The nine tracks on TRIBOLUMINESCENCE all feature SUMMERS’ rich, lush, multi-layered, rhythmically and spatial signature guitar tones that draws the listener in track after track.