As journalists, we at SonicScoop have a responsibility to be objective. That said, pardon us if we gush for a moment about what’s next at the Met.

This Saturday, June 22, at 6:30, the extra-galactic Police guitarist Andy Summers will hit NYC with what promises to be a very special show: A Certain Strangeness, a multimedia presentation demonstrating Summers’ extraordinary powers of sound and vision. It weaves together surreal imagery and his inimitable guitar explorations, all within the very special setting that is the New York Metropolitan Museum of Art.

Following his performance, the audience will be treated to a conversation between Summers and Jayson Dobney, Frederick P. Rose Curator in Charge, Department of Musical Instruments, The Met. We can tell you firsthand to expect a killer convo — our interview with Summers in 2017, on the release of his hypnotic solo album Triboluminescence was as insightful as it was unforgettable.

Saturday’s show is presented in conjunction with the critically praised Met exhibition, Play It Loud: Instruments of Rock & Roll. Tickets are $35, and can be purchased here.

Of this, we are certain: Strangeness is due to ensue on Saturday! We’ll savor every second of it. 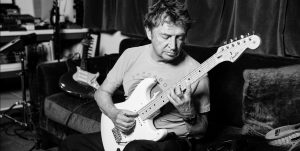